Pursuant to article 19 of the ordinance No. 2014-948 of August 20, 2014 regarding the governance and operations on the capital of corporations with public participation, the new Chief Executive Officer will be appointed by presidential decree.

The new CEO will be appointed in the next coming days. The company will enter in a new phase handling key manufacturing challenges in the next few years, including the expected operational launch of the new Arras plant, an essential feature of its ambitious expansion plans.

Denis Delval has managed LFB for 5 years. During his term, together with his team, he profoundly transformed LFB in a constructive social climate. His achievements included refocusing the Company on its core business with particular emphasis on key products and countries and setting up a new organisation designed to face new challenges. Denis Delval also enabled LFB to meet top-class quality standards by rolling out an ambitious upgrading program of manufacturing facilities. As a result, the French health products regulator (ANSM) lifted its injunction in November 2019. During his office Denis Delval relaunched the construction of the new plant in Arras, refocused development projects, registered a new recombinant drug in USA, the European Union and UK, and successfully relaunched France and foreign sales activities. He instilled a momentum of transformation in the entire company based on shared values. The Board of Directors thanks him for his continued commitment to LFB since 2017 and wishes him all the best for his future endeavours.

Jacques Brom is an acknowledged pharmaceutical manufacturing expert and comes with long experience. From 2012 to 2021 he served as President and CEO of Sanofi Chimie (2012-2021), where he was a member of the Sanofi Industrial Affairs council.

Jacques Brom is a graduate of Ecole Nationale Supérieure de Chimie de Mulhouse (France), PhD and Chemical Engineer in organic chemistry. He began his career in 1991 as Production Director at Roche France. In 1996, he joined Sanofi Aramon plant (Drug Substance), France before being nominated as Quetigny site Director (Drug Product). Jacques subsequently served in several roles as Director of Operations in the Newcastle-upon-Tyne site in U.K (Drug Product); as Vice President of Chemistry-Biochemistry, and Senior Vice President for Established and Generics products from 2017 to 2020 (37 industrial sites, 12 000 employees, 25 countries), and then CEO of Sanofi Active Ingredients Solutions/ Euroapi (2020-2021).

As of the appointment of the new CEO, Corinne Fau will become Chairwoman of the Board of Directors, which will enable to create a complementary and experienced tandem: Corinne Fau has been a member of the LFB Board for 5 years and as such has an in-depth knowledge of the challenges of this company, particularly financial given her responsibility as Chair of the Audit Committee and her expertise through her duties at Enedis as Chief Financial Officer.

Member of the Board and Chief Financial Officer for Enedis, Corinne Fau has been with the EDF group for over 28 years, initially contributing to investment projects in the diversification holding company, SDS, and subsequently with the M&A team at EDF’s Finance Division. In 2002 she began overseeing operational management for EDF’s IPO until 2005, and then became Director of Financial Management at the Customer Branch until 2010 and Chief Financial Officer for EDF France until 2014. She began her career as an auditor with Befec Mulquin & Associés then joined Price Waterhouse as a manager in Corporate Finance. She graduated from the Paris Institute of Political Studies (IEP de Paris) and has a master’s degree in Economics (Paris II). 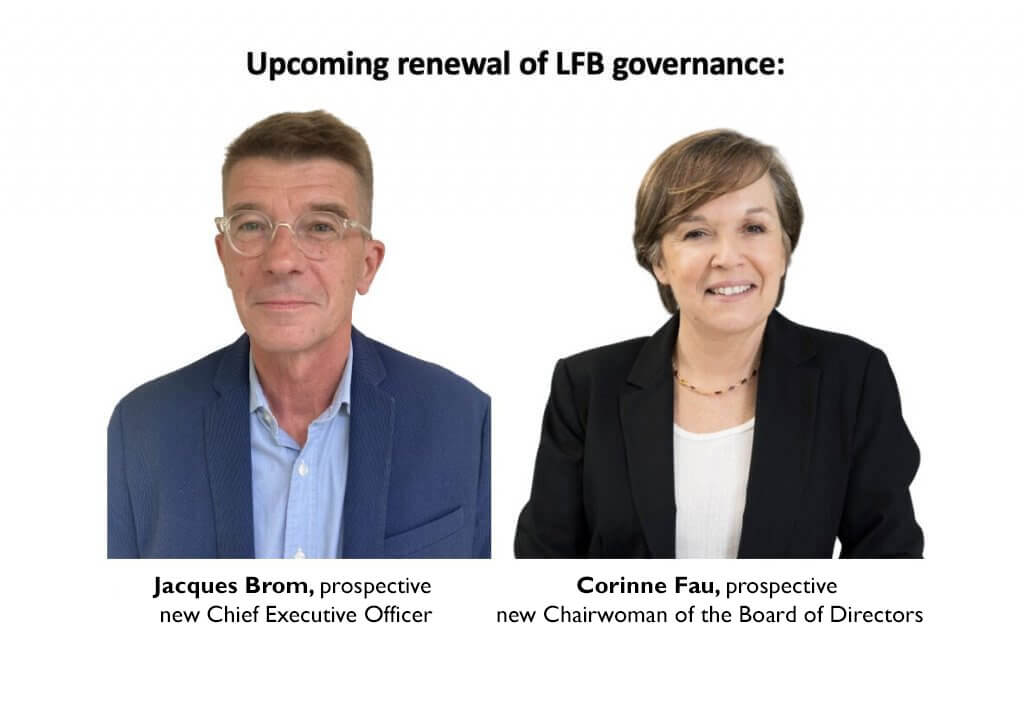